If you are lucky enough to be near one of the twelve bays on the Oregon Coast (see Oregon Bay Locations). You have the opportunity to go bay clamming in some of the most fertile clamming beds found in the world. This bodes well for people that enjoy making homemade clam chowder. There is nothing like a rich, hot, creamy, buttery, bowl of delicious, clam chowder.

Buy My Book – Learn How To Bay Clam

Gaper bay clams don’t move in the sand. They are also abundant in the Pacific Northwest. Their shows are easy to find! To get started find a good negative tide, as some bay areas require a lower tide then others. Bring a shovel and a bucket. Also, you can use a clam bag but it’s going to get heavy and in the way, that is why most people prefer a 5-gallon bucket. So you are out on the Bay, it is a negative tide and all you see are small holes/shows everywhere. Most of the shows are made by other various marine life and other species of clams. But the larger clams (can be over an inch in diameter) are going to be the gaper clams you’re looking for (see identifying clam shows).

When you have spotted a gaper show, do not dig down on top of the show. You want to dig 6″ to 8″ around the show; because, the sand/mud wall is going to collapse and fill the hole. Use the razor clamming or other shovel to remove the first foot of material making sure not to go to deep. Once you have removed a good foot of mud/sand and have a relatively descent sized hole to work with; we recommend going at it with your hands here. Don’t be surprised if you get down 2 or 3 feet, stay patient. Be careful pulling on the neck. Attached to it is a clam that might be the size of your fist. So take the time to clear that sand away to find your prize intact.

If you’re going to Siletz Bay on the Oregon Coast you are in for a clamming treat; because, these little guys (purple varnish clams) are everywhere and you don’t need a very low tide to harvest them. You can also take up to 72. They have a fairly small show of two holes close together; but, when you find one, you usually find many, so bring that bucket and some waders or boots! When you do dig for them, make sure your not leave them undetected in the mud.

Buy My Book – Learn All About Clamming

Depending on the Bay you are clamming, you are going to run into a wide variety of clams. You’ve been introduced to Purple Varnish and Gaper Clams (above); the vast majority are similar in approach to dig. Below are some more popular species.

The Softshell Clam has a hole very similar to Gaper clam (see Identifying Clam Shows). A Butter Clam leaves a very particular type of show that looks like someone stuck a flat-head screw driver into the ground. These clams are not found nearly as deep as a gaper clam. So finding and digging them is very similar to the Gaper clam.

These are fun to rake because they are easy to find and they live about one inch to two inches below the sand. Their shows look like two very small holes right next each other. They are found so close to the surface people often rake for them; many times they are just under the surface and you can just pick them out with your hands. Cockle clamming really makes for some great clamming for the kids because they can do it with their hands. In fact, depending on the area you can see them sitting on the surface. Then just walk around and pick them up with your hands.

Also sometimes refereed to as Steamer Clams, look similar to Cockles but are smaller and found deeper (5″ to 10″) below the surface. They both enjoy some of the same habitat. So you might run into a few together, but Littlenecks do prefer the more course, muddier areas of the Bay. Once you find one, keep digging outward and you’ll find more.

The gaper clam has a close relative called a geoduck clam (Panope generosa). The geoduck is the largest clam in the world. It can live up to (hold on to your waders) a hundred and forty years old! The oldest being a whopping 168 years old. They are hard to buy in the U.S. because China pays up to $200/lb. That’s a lot of clams!

Geoducks are scarce in the State of Oregon. On a “very” low tide, occasionally they have been found in Netarts Bay, and other bays inter-tidal zone. Finding these clams is difficult, so harvesting these bay clams is time consuming as well. Some people mark the bay clam show by placing a lengthy dowel in the hole. They have a very long siphon which can be up to 3′ long, and are 3′ to 4′ down below the surface. so, The most difficult part is keeping the walls of your dig hole from collapsing. A lot of people use a hollowed out 5-gallon bucket. Then dig out the mud/sand from the center of it while continuing to go deeper.

A lot of Sporting Goods stores will sell a 4 foot metal cylinder too. It is not uncommon to see a galvanized garbage can without a bottom used as well. There is also the issue of water filling the hole. You can use an old coffee can to remove the water or maybe a friend that has a Shrimp Gun. The trick is removing as much sand, silk and mud out of that container while locating the bay clam. 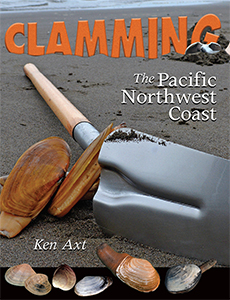